ENJOY THE FOODS YOU LOVE 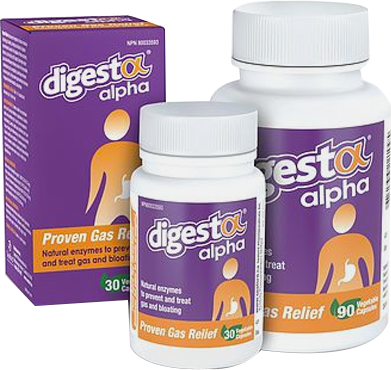 Digestive enzymes to prevent and treat gas and bloating

What is Dietary Intolerance?

What is the difference between a food allergy and dietary intolerance?

Dietary intolerance is a result of certain individual compounds found within the offending food that cannot be properly processed and absorbed by the digestive system. The immune system plays no part in food intolerance. The body is simply unable to digest or absorb certain substances in the food which causes symptoms to originate in the gastrointestinal system. Those with dietary intolerance are typically intolerant to the fructose, lactose or other similar compounds found in various types of foods. It generally takes a more normal to larger sized food portion to produce symptoms of food intolerance. Common food intolerances include dairy products, grains that contain gluten and any other foods that cause gastrointestinal symptoms like gas, bloating and indigestion (B.I.G. symptoms).

A food allergy is a result of the immune system over-reacting to specific proteins in the offending food eaten. The body mistakenly identifies the food protein as harmful and creates antibodies called immunoglobulin E (IgE). The immune system causes a reaction in the respiratory system, gastrointestinal tract, skin or cardiovascular system that results in strong allergic reactions such as itching, rash, shortness of breath and swelling. Symptoms can affect the whole body, and not just the gastrointestinal system. With an allergy, even a small amount of the ingested food will trigger symptoms and will usually appear suddenly and can also be life-threatening. Common food allergies include peanut, tree nuts, fish and shellfish allergies.

What is Lactose Intolerance?

Lactose intolerance is the most common food intolerance which occurs when people can’t digest lactose, a sugar found in dairy foods. Their inability to digest the lactose occurs as a result of a missing or low level of lactase enzymes.

Gluten is a protein found in common grains including wheat, rye, barley and other cereal grains. Gluten in flour helps foods maintain their shape like breads and other baked goods. Gluten can be found in many types of foods and is widely used in the production of many processed and packaged foods. There is a genetically determined condition called celiac disease in which eating even a minute amount of gluten causes an inflammatory immune related reaction in intestinal mucosa which is followed by damage.

Gluten intolerance is a condition distinct from celiac disease in which eating gluten causes symptoms of pain, bloating and diarrhea without the biopsy change described in celiac disease.

Fructan intolerance is intolerance to a carbohydrate component of wheat, barley and rye resulting in similar symptoms to gluten intolerance, but is not due to gluten.

Unlike a food allergy, with dietary intolerance, symptoms tend to occur when an individual ingests a significant quantity of food.

What is B.I.G. – Bloating, Indigestion, Gas

Dietary intolerance symptoms are a BIG problem for many and are primarily manifested by the following:

Dietary intolerances are caused by the partial or complete absence of the digestive enzyme activity responsible for properly breaking down and absorbing food components (ie. lactose, fructose etc.).

These deficiencies are often innate but can also be diet related or arise due to illness.

Enzymes are needed to fully digest food within the digestive system. If some or all of these digestive enzymes are absent or at insufficient levels proper digestion may be compromised.

Food additives are a common cause of food intolerance and an increasingly growing problem as more and more foods contain additives to enhance flavours, increase shelf life and make foods more appealing. Of the many additives used in the food industry, a relatively small number are thought to cause any real problems, but may include additives such as:

Enzymes are needed to fully digest food within the digestive system. If some or all of these digestive enzymes are absent or at insufficient levels proper digestion may be compromised.

If you experience adverse reactions to food, you should consult your family physician or a dietician to help diagnosis the problem, the offending food item and a plan of action to alleviate further adverse symptoms.

The signs and symptoms of food intolerance and allergy can often overlap making it difficult to determine which one to diagnose. However, certain patterns and onset of action of the adverse symptoms can help your health care professional distinguish between the two forms.

Certain food intolerances are easily diagnosed by your physician through a number of specific tests.

Lactose intolerance can be diagnosed by means of a hydrogen breath test.

Gluten intolerance and/or celiac disease are diagnosed by means of an intestinal biopsy, stool samples, blood and/or genetic testing.

Apart from lactose and gluten intolerance there is no accurate and reliable test to identify which other foods are the culprits in developing dietary intolerance symptoms. Some people are also intolerant to several different groups of foods which makes diagnosis even harder and longer to determine which food items are the culprits.

Patients are advised to keep a detailed food diary to document which foods are eaten when, any resulting symptoms and when they appeared. The information gathered here can then help a physician or dietician identify which foods are causing the adverse reactions and why.

The best diagnostic test is an exclusion diet, where potentially offending food items are selectively removed from the diet in a trial and error approach. Each potential food item is removed for a set period of time, to isolate and determine whether it is the item causing the GI symptoms. If during this period of time the adverse symptoms go away, it is likely the food culprit has been found, particularly if the symptoms return when the food item is reintroduced into the diet.

The best treatment for food intolerance is to:

Having B.I.G. requires a BIG Solution!

Bloating, indigestion and gas are hard to endure but avoiding the foods you love can be just as challenging.

Where compliance is an issue, and one finds it difficult trying to avoid the offending food item, digestive enzyme supplements are also available that help with digestion and work to alleviate adverse symptoms.

For lactose intolerance in particular, there are a number of lactase enzyme supplements that can provide the body with the missing lactase enzyme.